Last month, as you already know, we had a family adventure......we travelled to South Africa to spend two weeks in the sunshine, visiting all the places that my husband (who was born near Cape Town) used to go to as a kid.

We did a fair mix of everything, the touristy stuff, catching up with friends and a good deal of eating good food and relaxing.

Here are a selection of memories...(this is very abridged, and I won't bore you with details of all the lovely food we ate!) 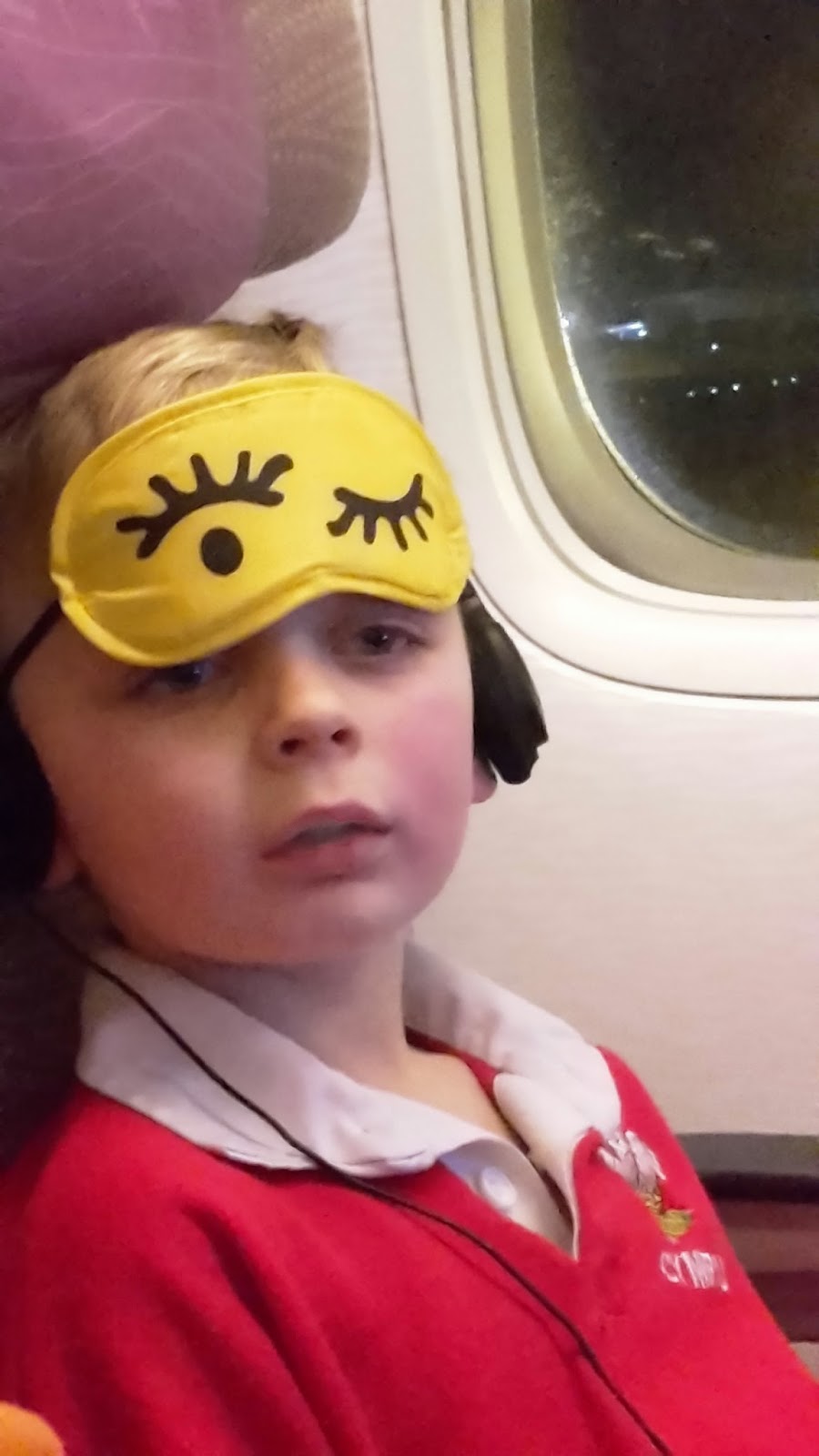 We did the long haul, Birmingham to Dubai...Dubai to Cape Town...17 hours in total.

Unfortunately not everything went quite as swimmingly as it should and we ended up just missing our connection in Dubai as it was a bit cloudy  to land.  This meant us spending a day in Dubai.... as it turned out, it was a great experience for all of us, a chance to look around this spectacular place....Its all about the wow factor, interesting to see, but I'm happy if that is my one and only visit there.

(us wearing all the wrong clothes, but not having our suitcases meant no other option...it certainly makes me realise I will never pack the same again!)

The tallest building in the world 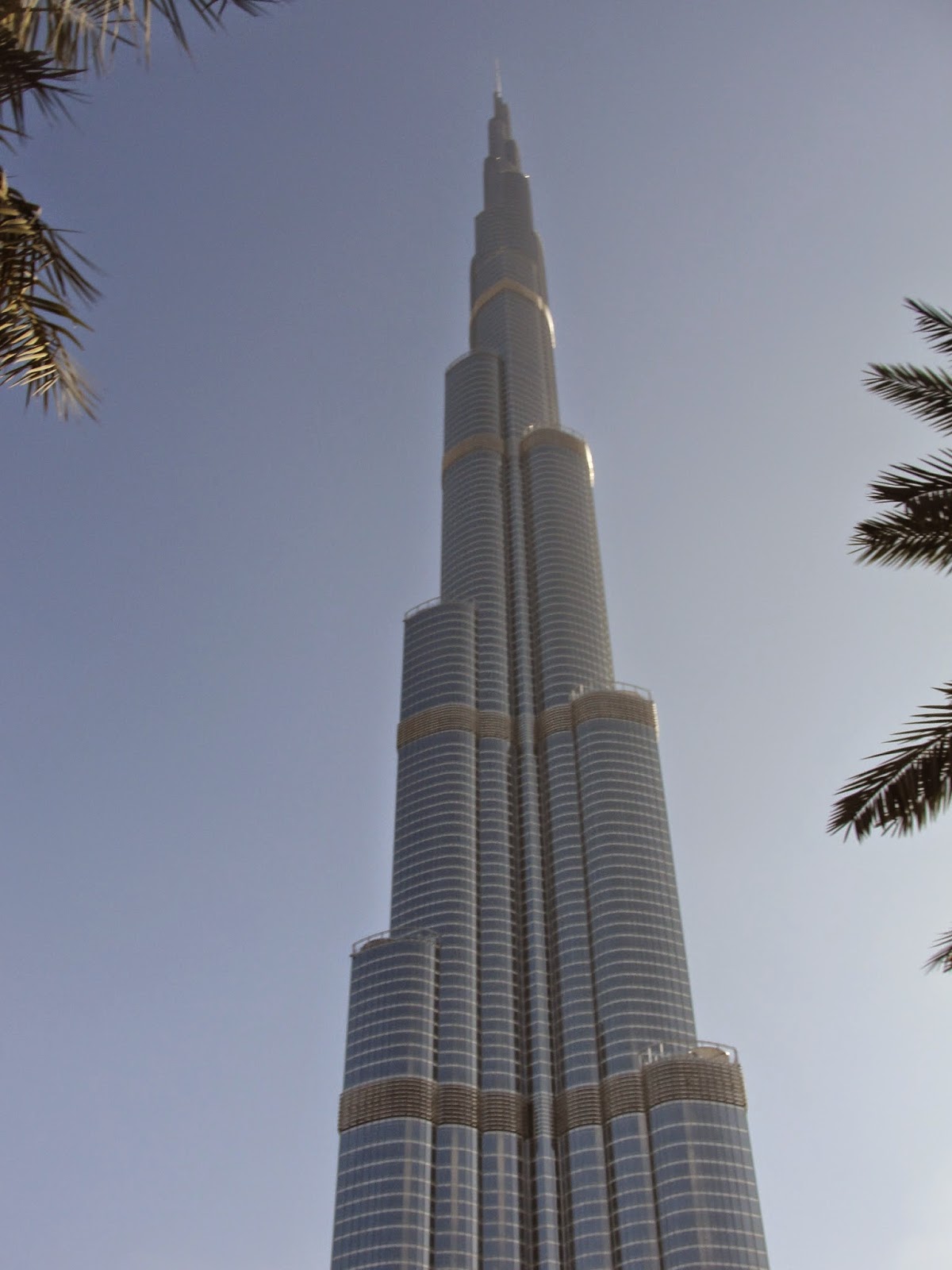 So after we finally arrived a day later than hoped, we slept, caught up and then hit the road...

This place is just so beautiful....I didn't go with any  ideas what it may be like, and therefore was just blown away by the scenery....especially the mountains, rising up out of the sea....the blue-green seas the whiter-than-white sands. 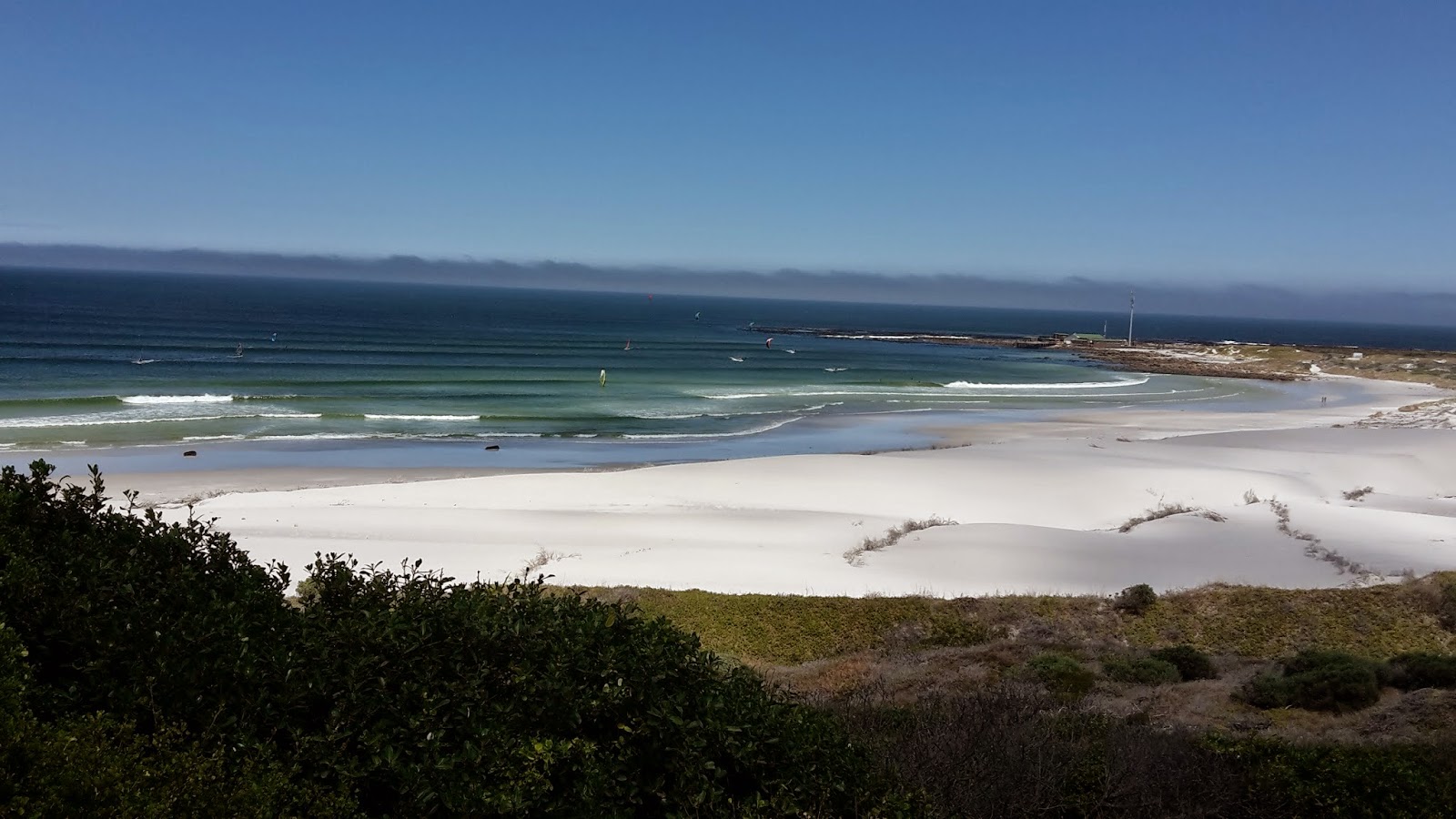 This is Misty Cliffs, breathtakingly beautiful... 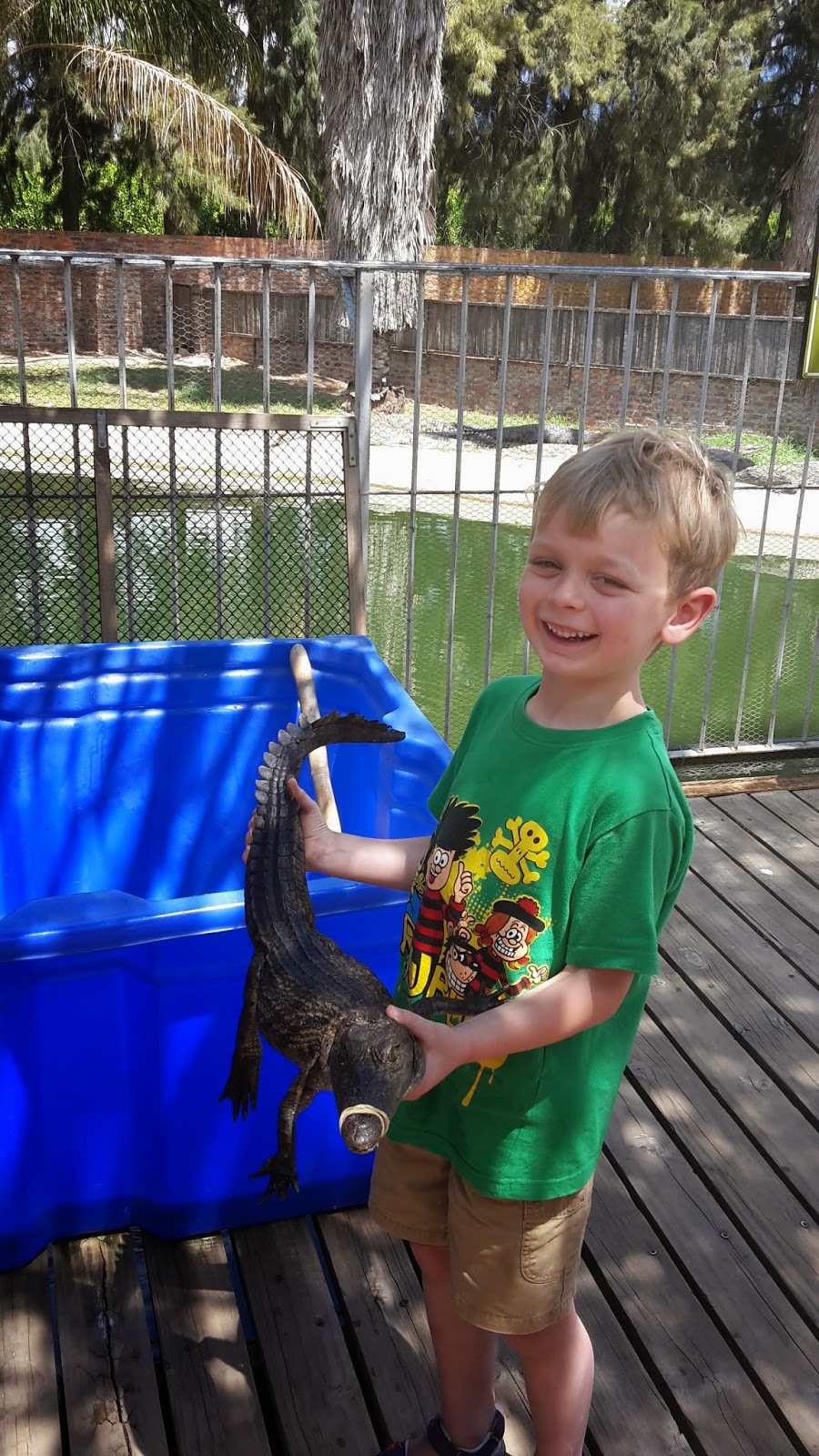 Littlest boy holding a croc (with it's beak well and truly shut tight!) 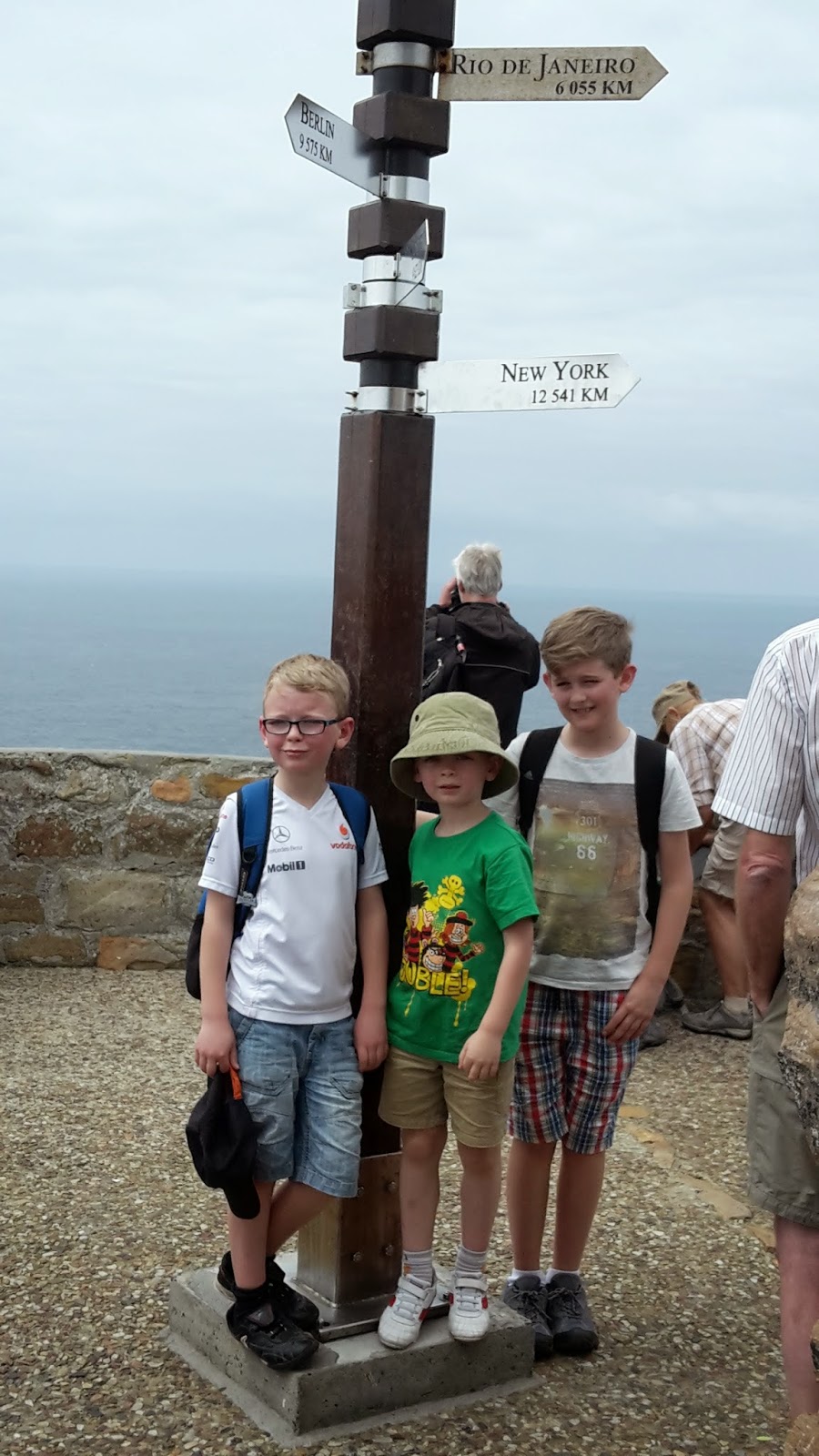 Cape Point (which actually isn't the lowest point) a beautiful nature reserve with the Indian Ocean one side and the Atlantic on the other...one side warm....one somewhat cooler.  We had the most amazing meal in a restaurant overlooking the oceans, a memory hard to beat, and as one of the boys pointed out when I said how romantic the setting was, we were there on Valentine's day. 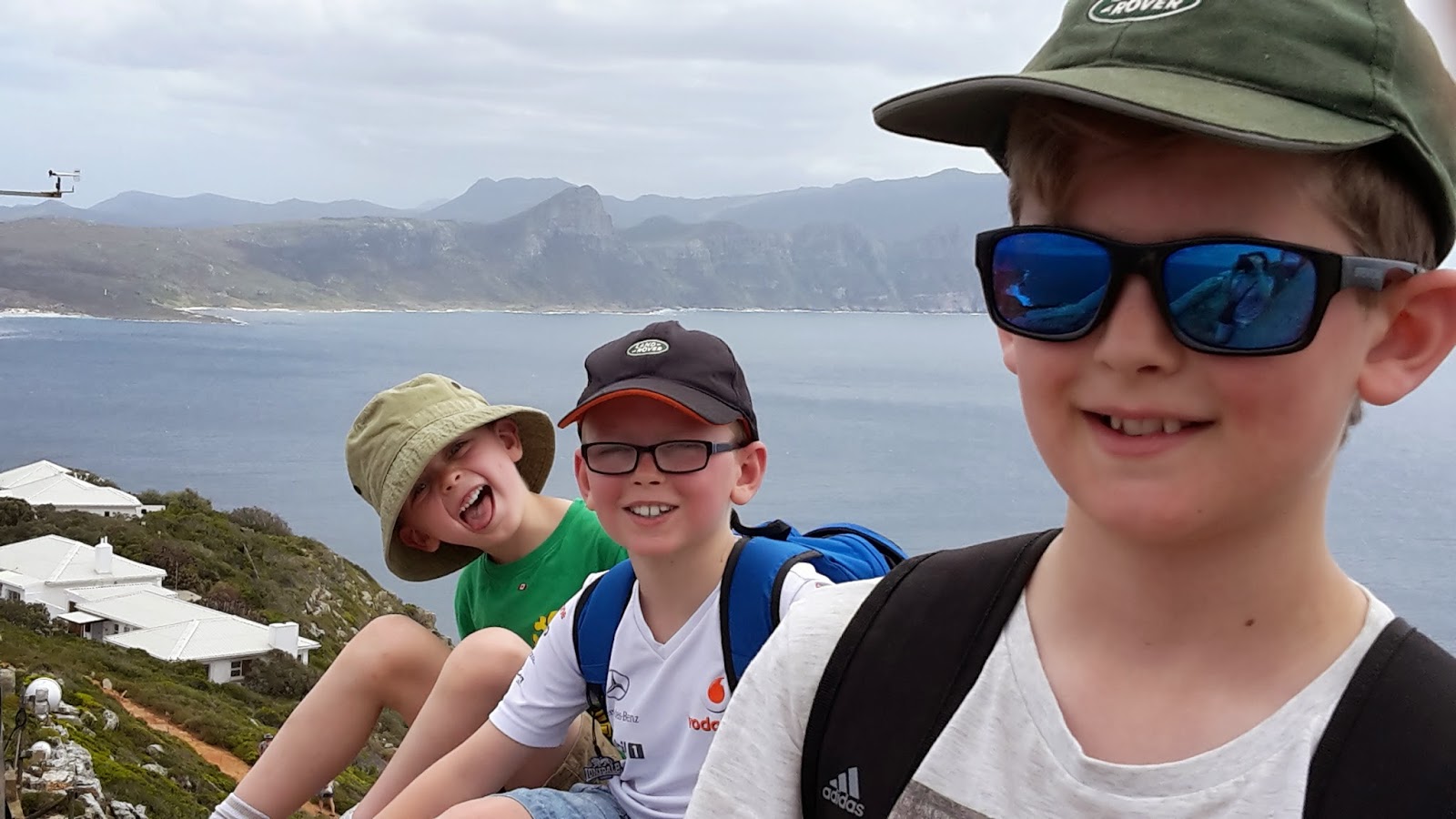 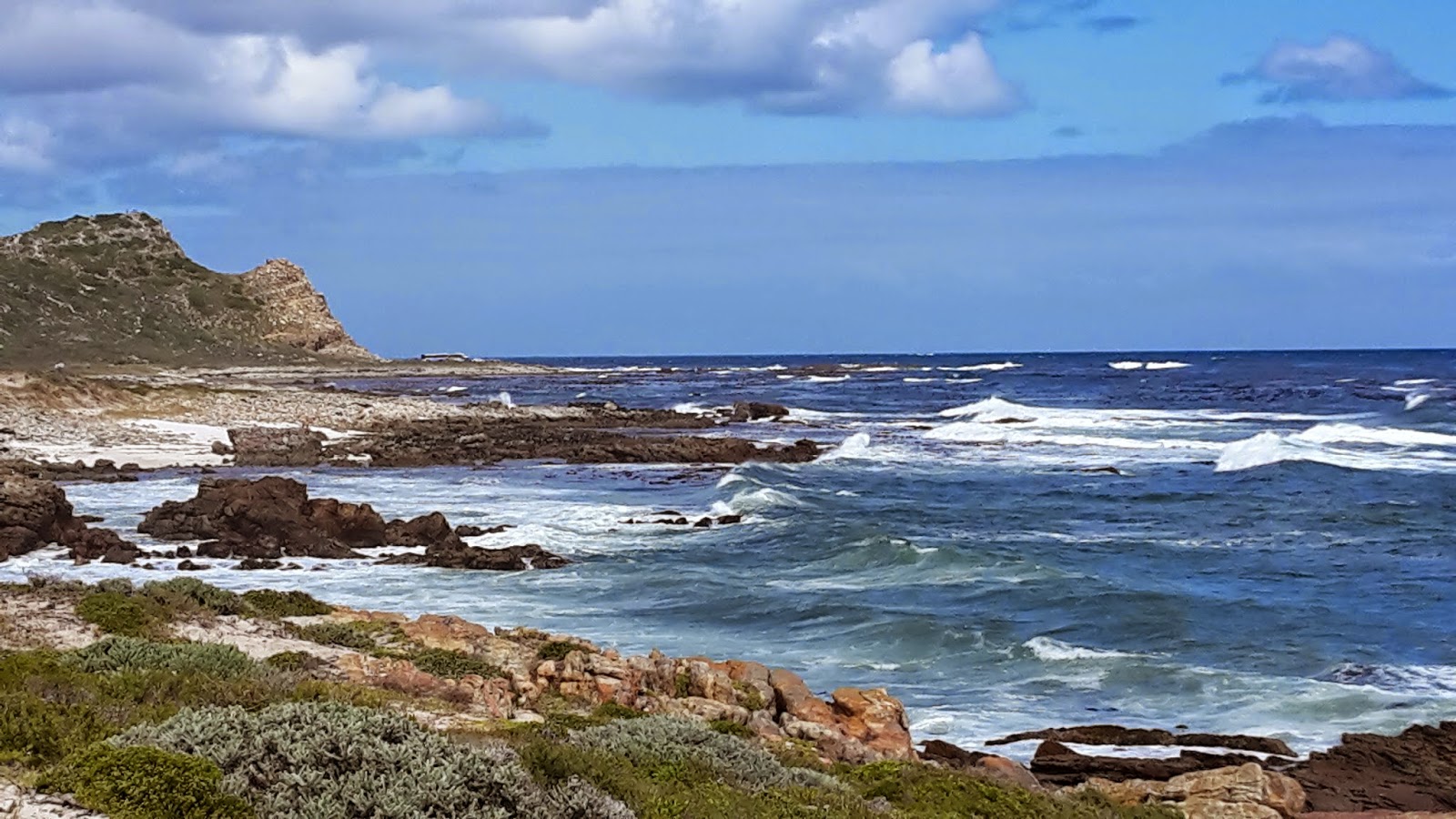 We looked out for baboons the whole time when we were in South Africa, but right at the end of the holiday, we finally saw them here.  (They have been a real menace in the past, and with tourists feeding them they can be fairly aggressive, they are not as dominant as they were thankfully, as people have been employed to keep them in the mountains where they are safer and people are not in danger of being attacked).  While we were at the reserve we saw ostriches and dassies also 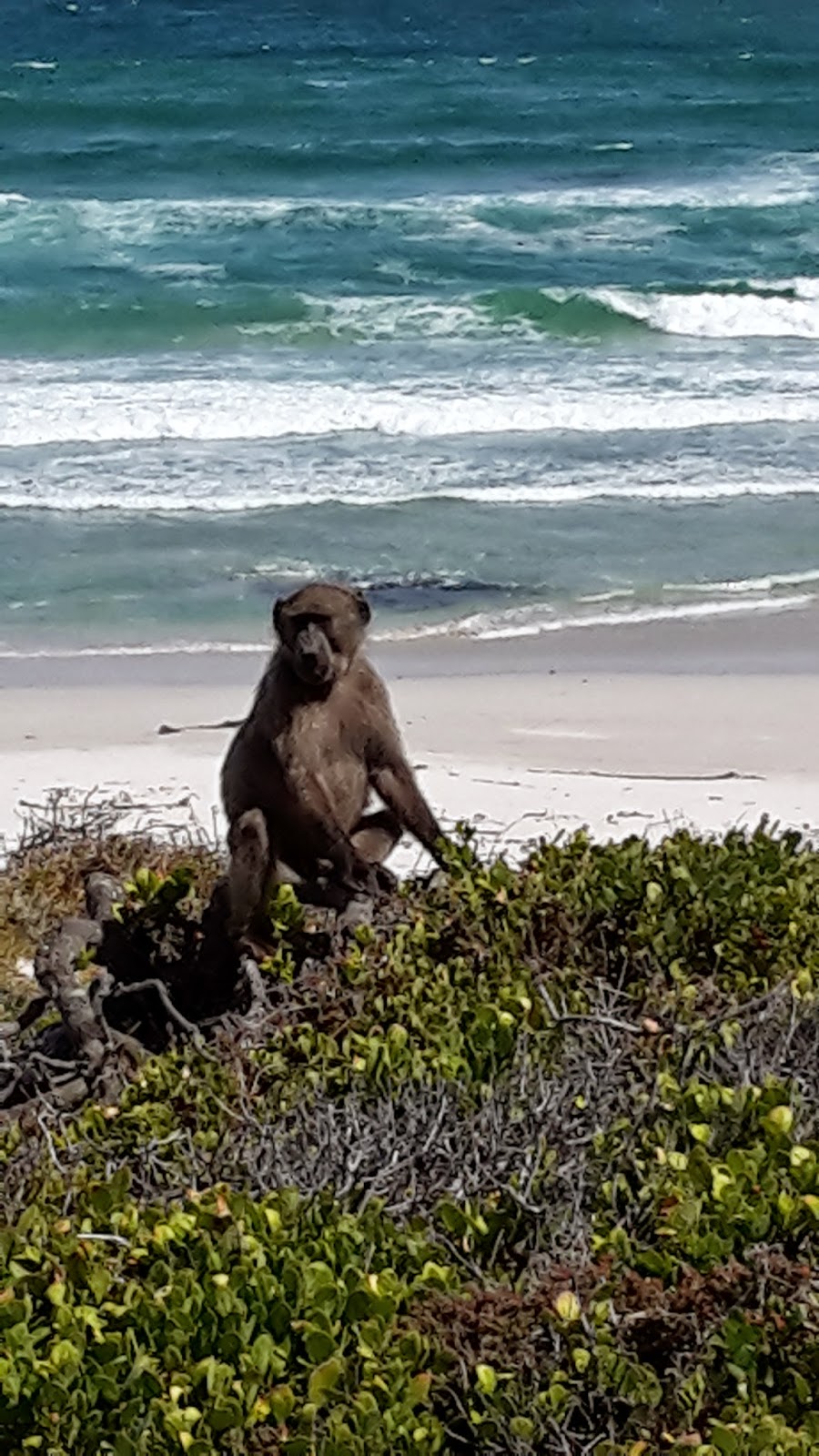 Around every corner there were views like this one....white sands and turquoise seas....stunning.  This is Noordhoek beach where my hubby went dogwalking when he was a young lad. 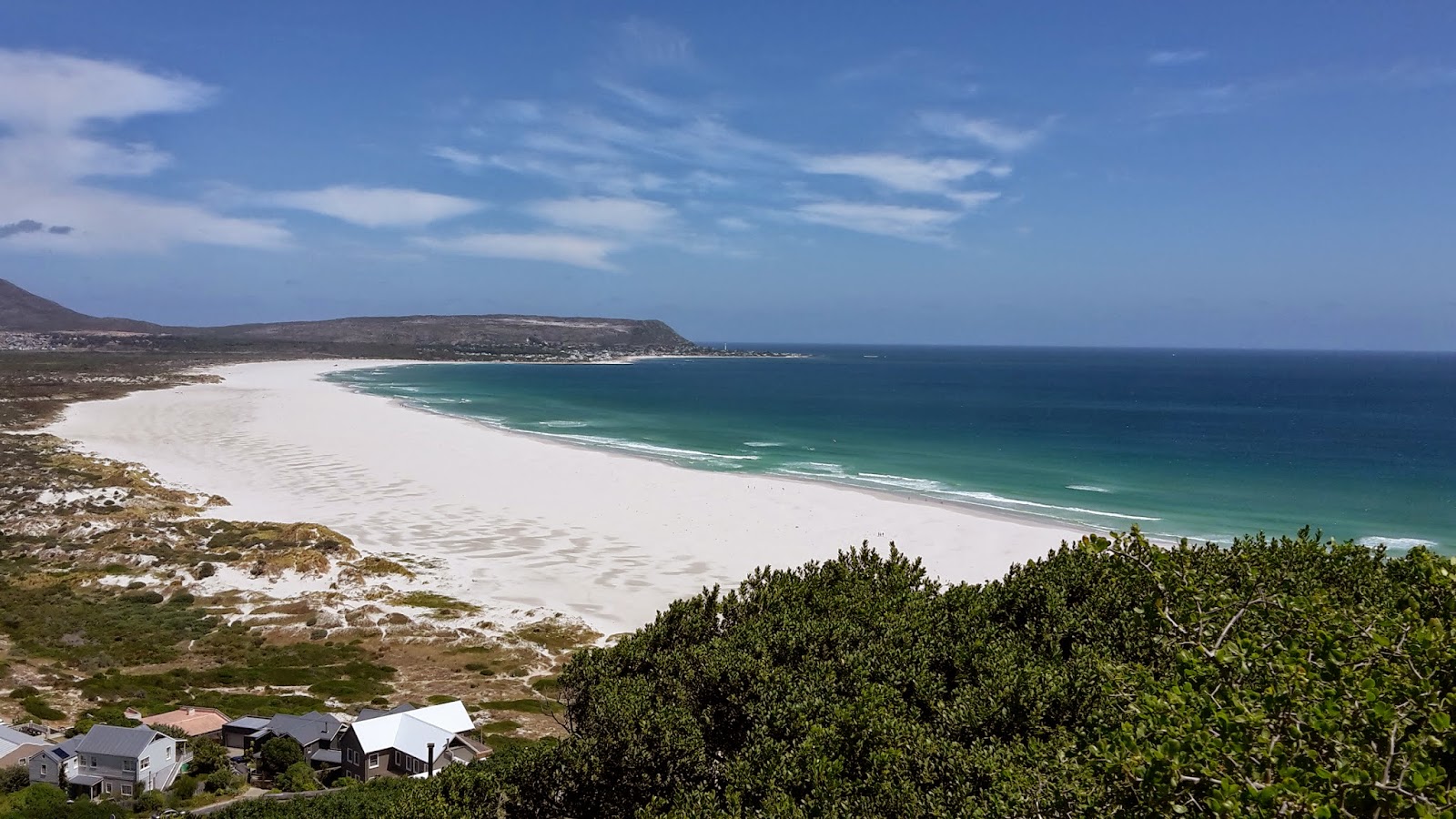 This is a photo taken from Chapman's Peak, a breath taking view across to Hout Bay where my Father-in-law used to work (which we later drove around to and saw seals on the dock) 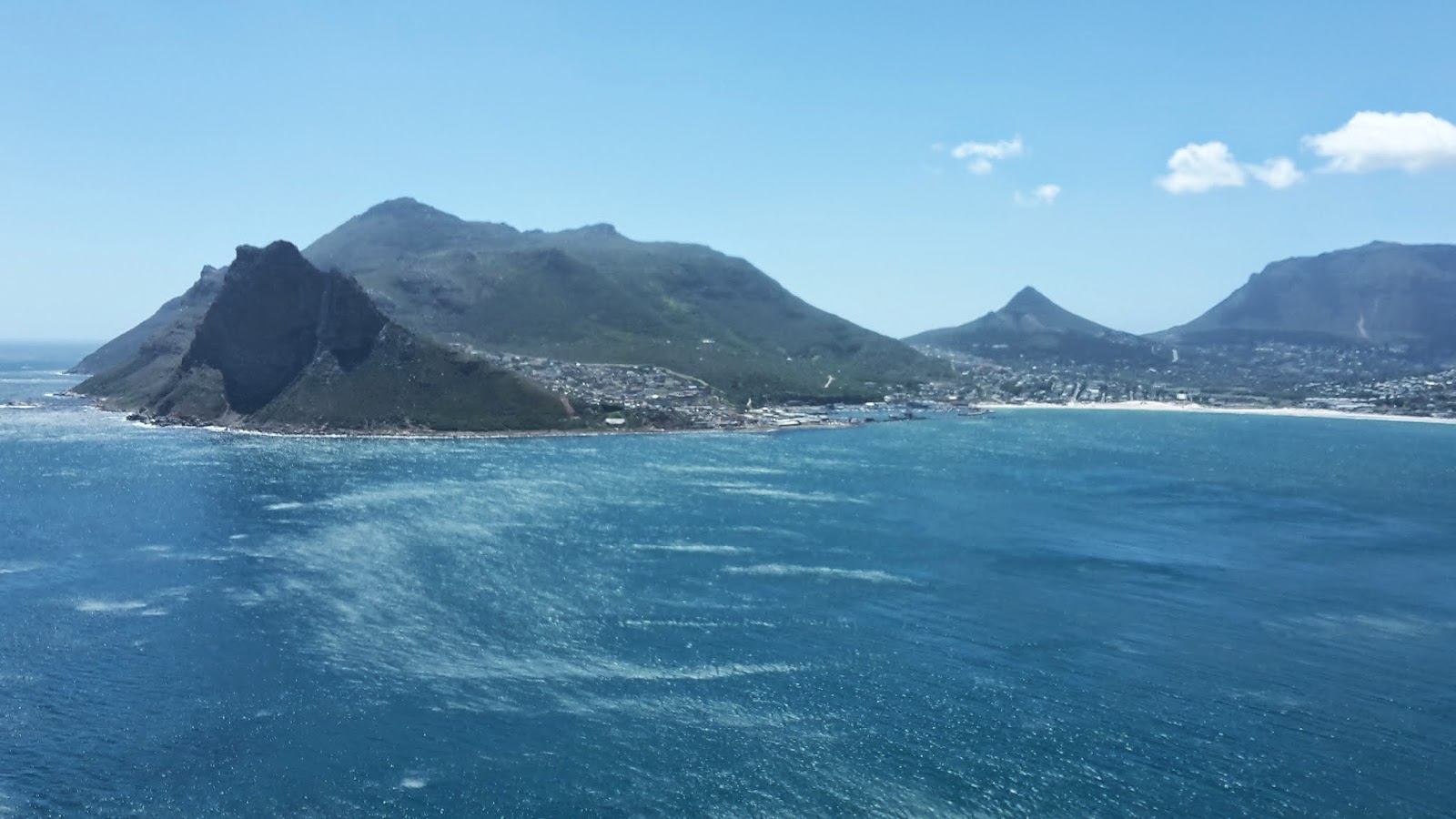 This is the catwalk at Fish Hoek where my husband grew up. 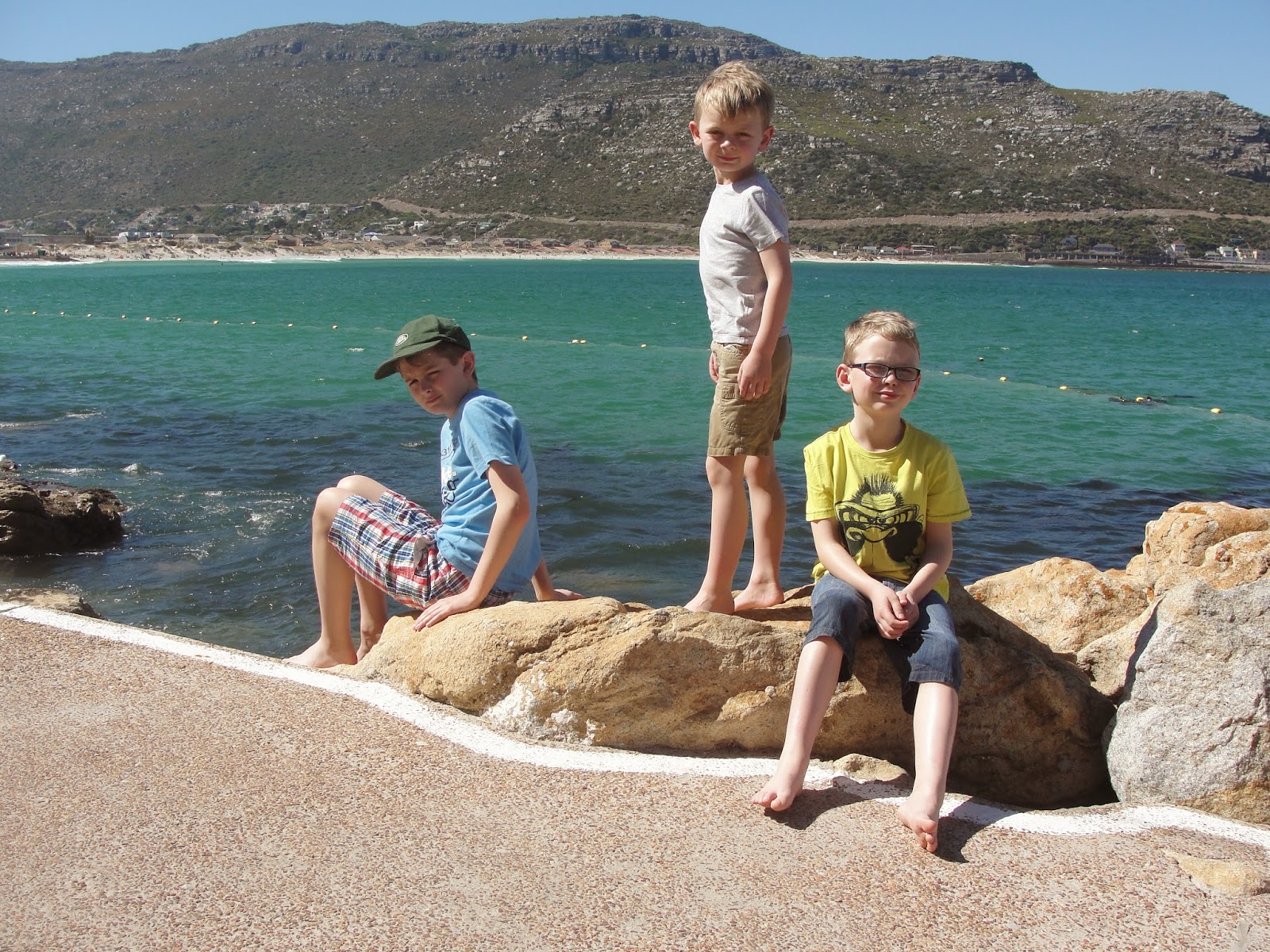 Boulders beach where they have resident penguins.  While we were here, there were baby penguins, all fluffy and brown sitting in dug out holes in the sand....sooo cute! 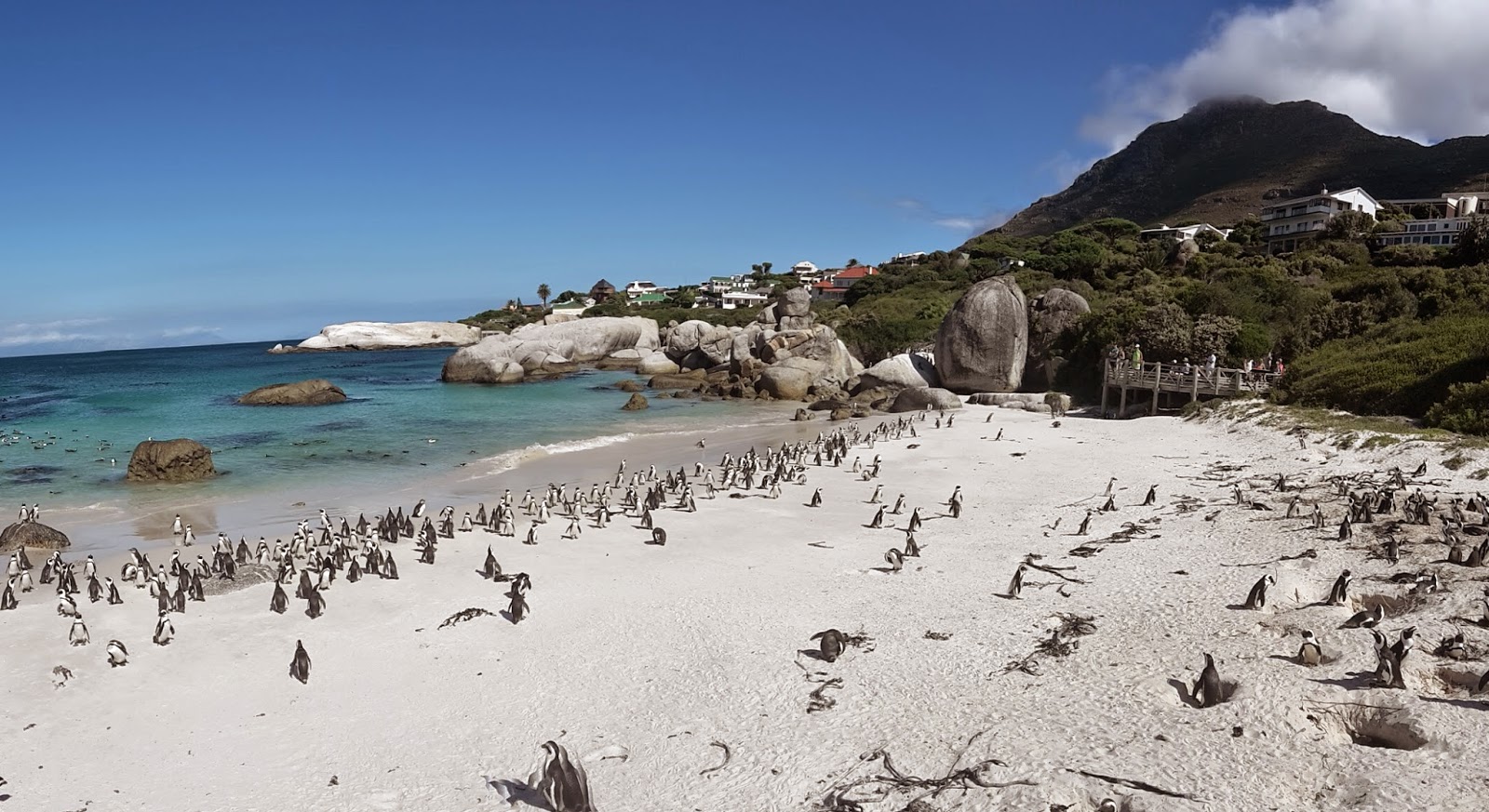 We visited Cape Town (I bought some yarn!) and then we took the cable car up to the top of Table Mountain. 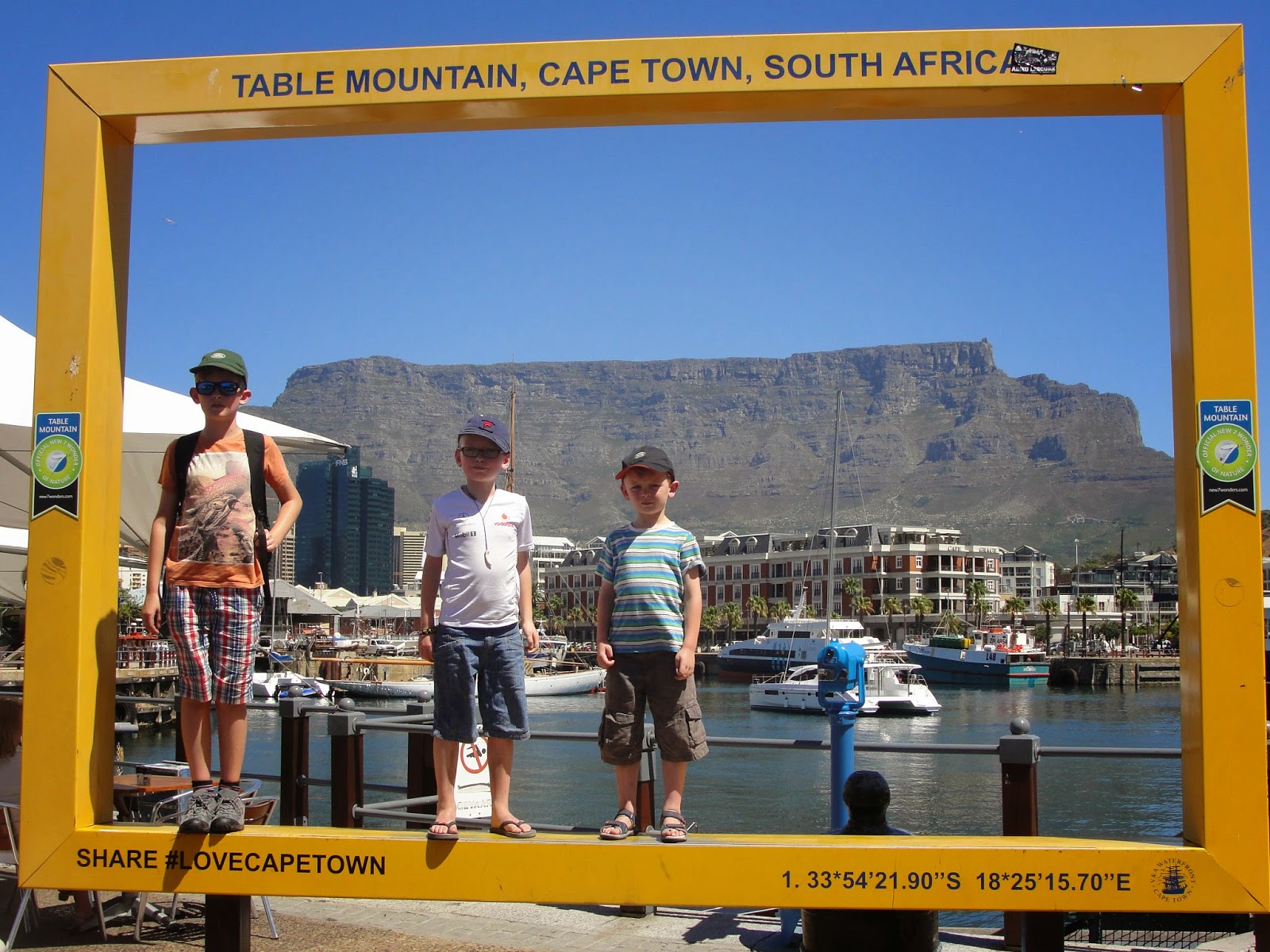 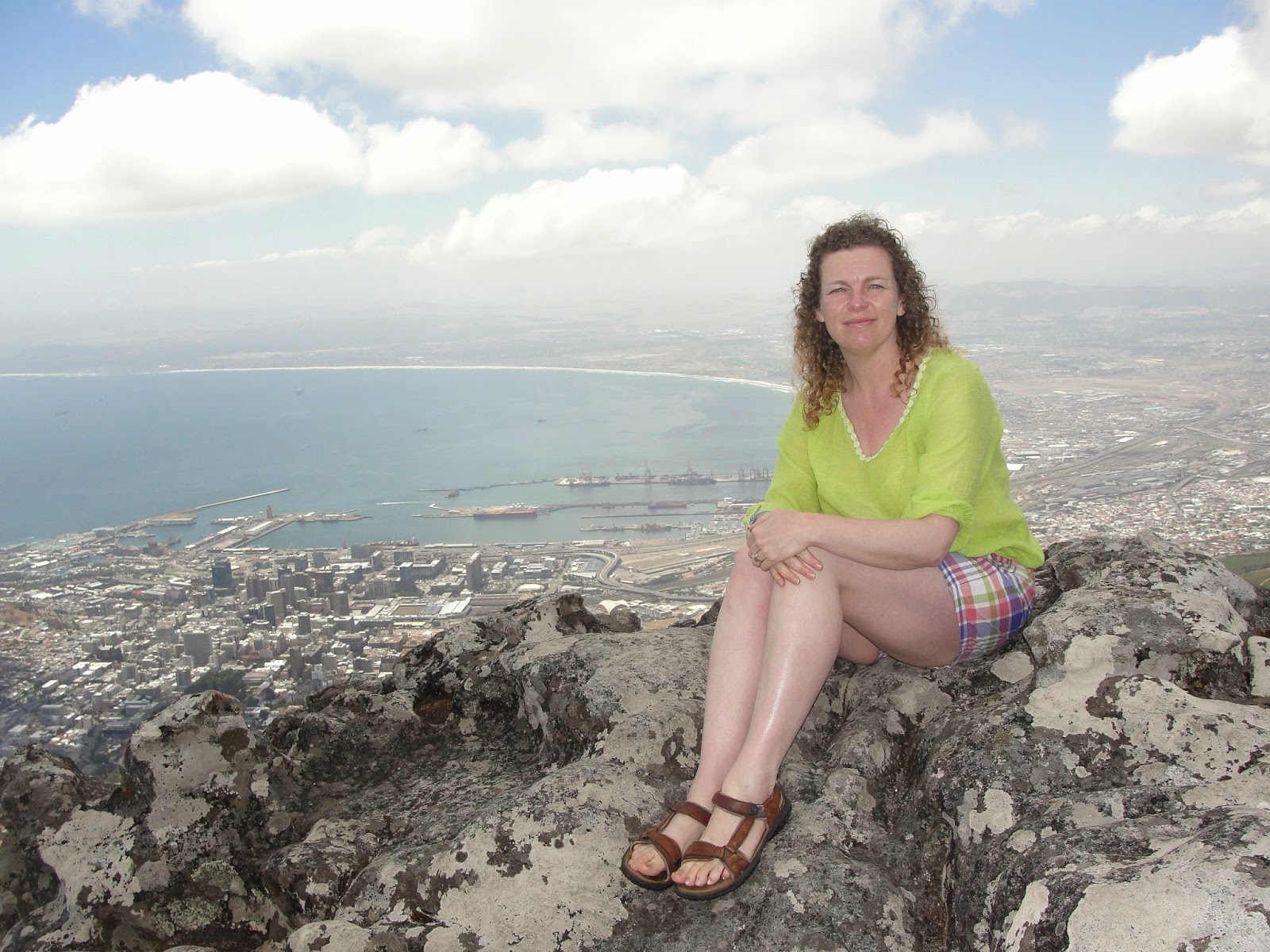 The views from the top of Table Mountain are glorious....what an awesome day it was. 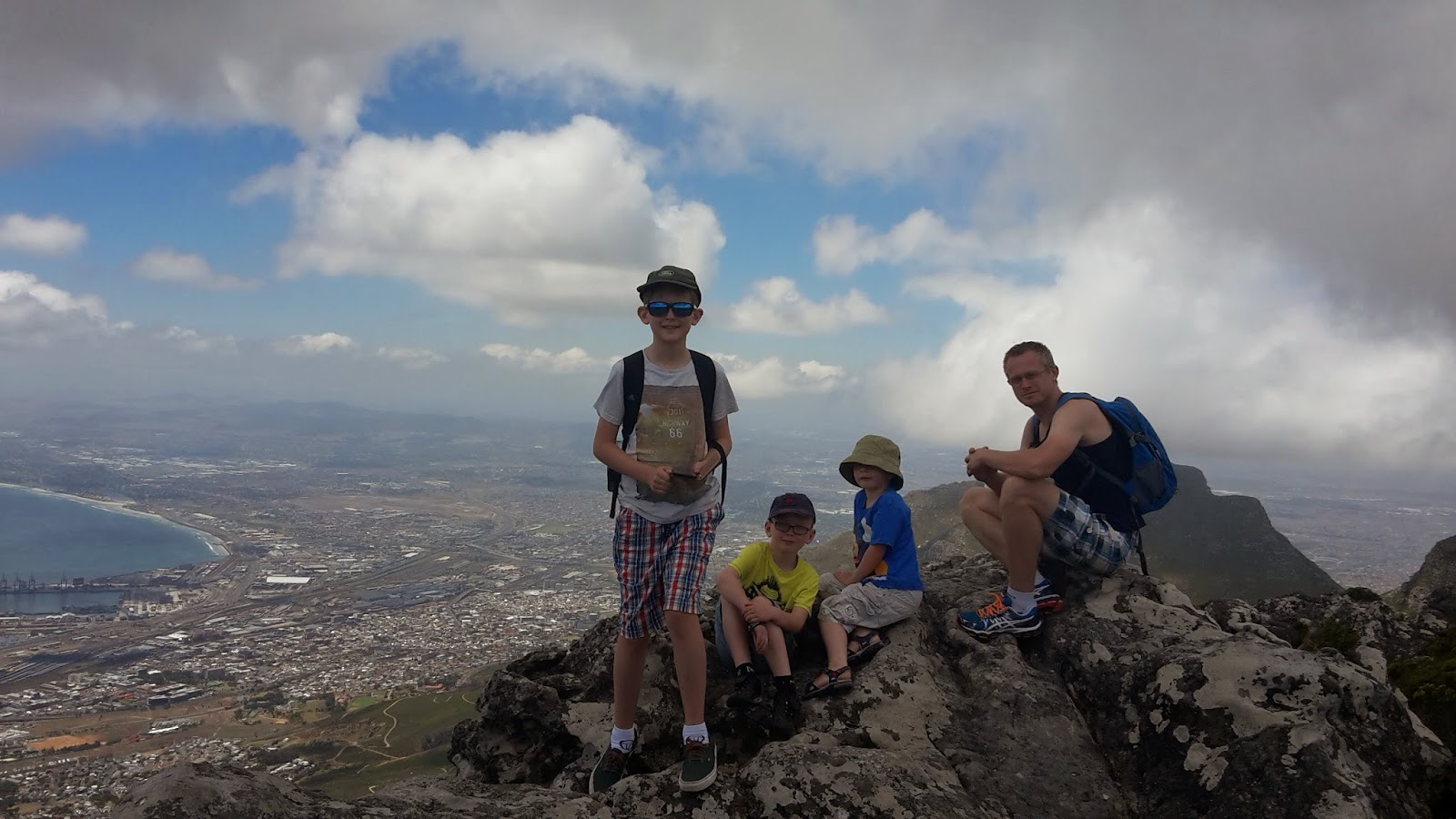 The beach at Fish Hoek has people shark spotting in the high places.  When a shark is seen, a siren goes off to warn people.  The day after the boys were surfing, this happened and it really was quite chilling.  The shark had come in with the fishing boats.

When my husband was a little boy he regularly went surfing after school, but in the last fifteen years or so there has been a big increase in great whites.  I was relieved I  admit when the surfing finished! 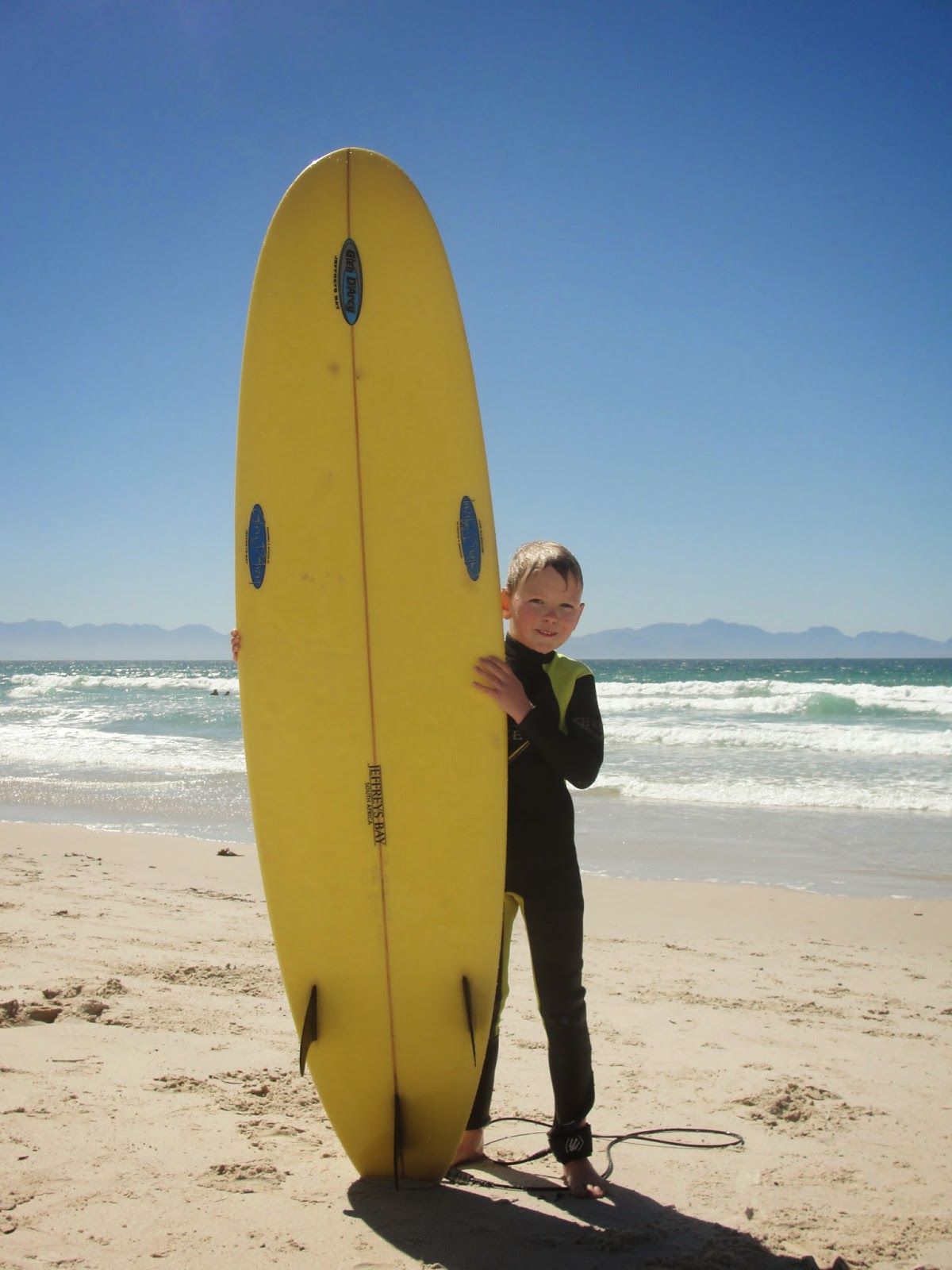 Middle-boy who turned out to be a real natural. 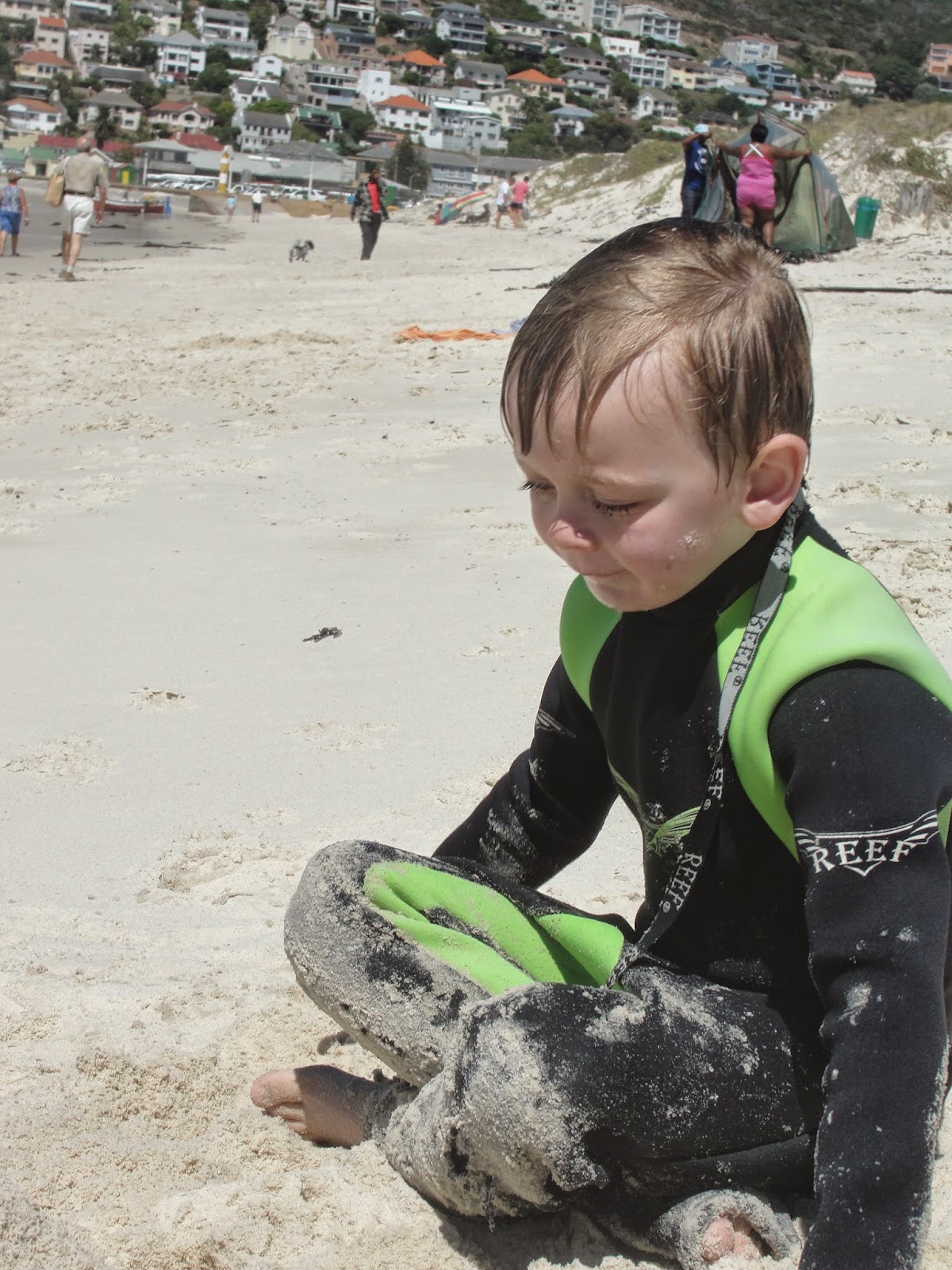 Littlest boy taking a break from the surf! 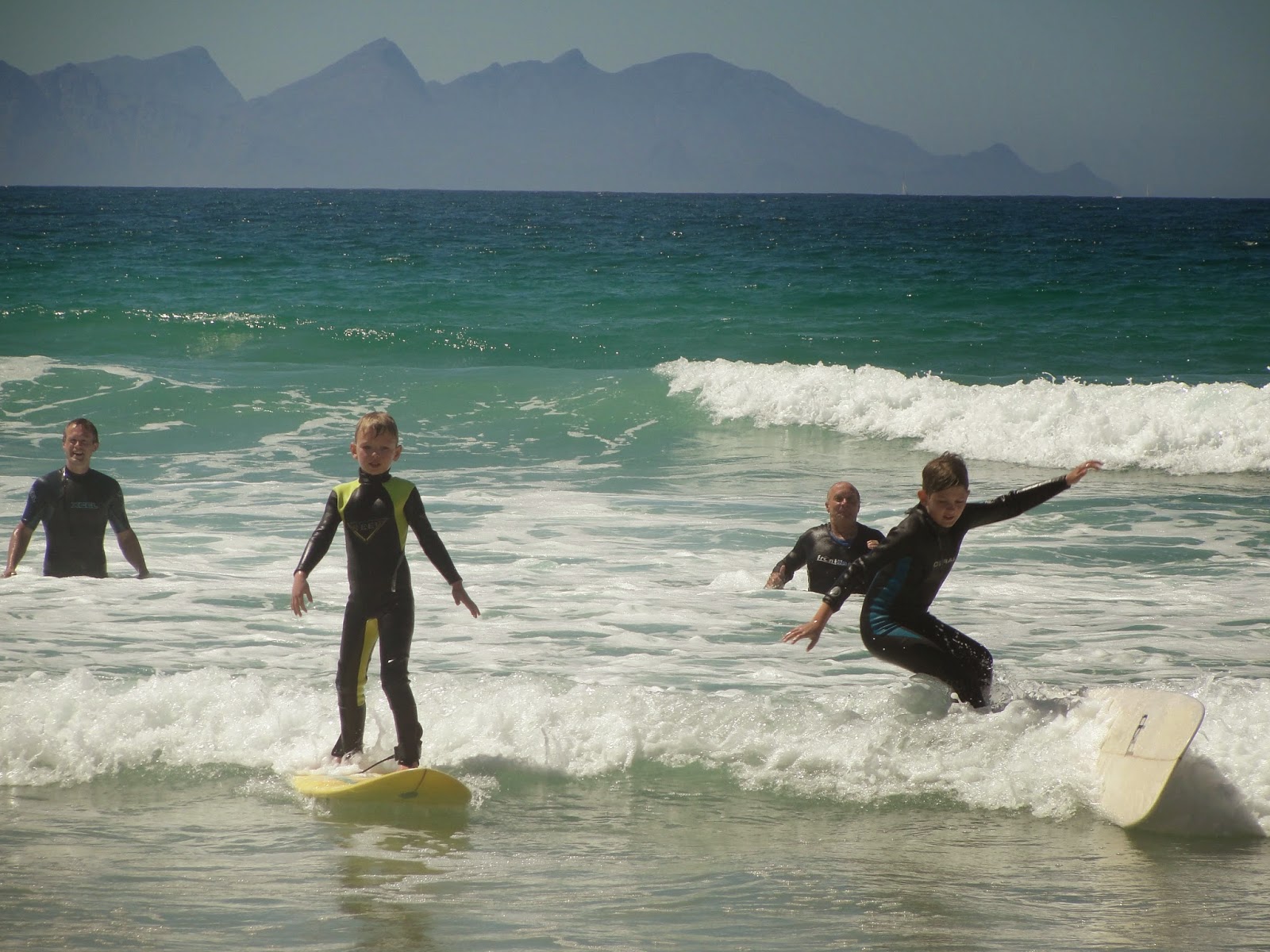 Mastered! (and thankfully I got the photo when they were both up at the same time!)  This day will remain with the boys, as they had a wonderful time.  This was a surfing masterclass from my hubby's old scout master who believe it or not is still doing the job today....we took the boys to cubs and learned about how the South African cubs run things.

This wasn't the trip of a lifetime, as we hope to go again, maybe even soon.  The husband took part in a marathon while we there, and hopes to do 'The Two Oceans' ultra-marathon next year.

I loved it....we only saw a small part of it, but it is an amazing country, and I can't wait to go back! 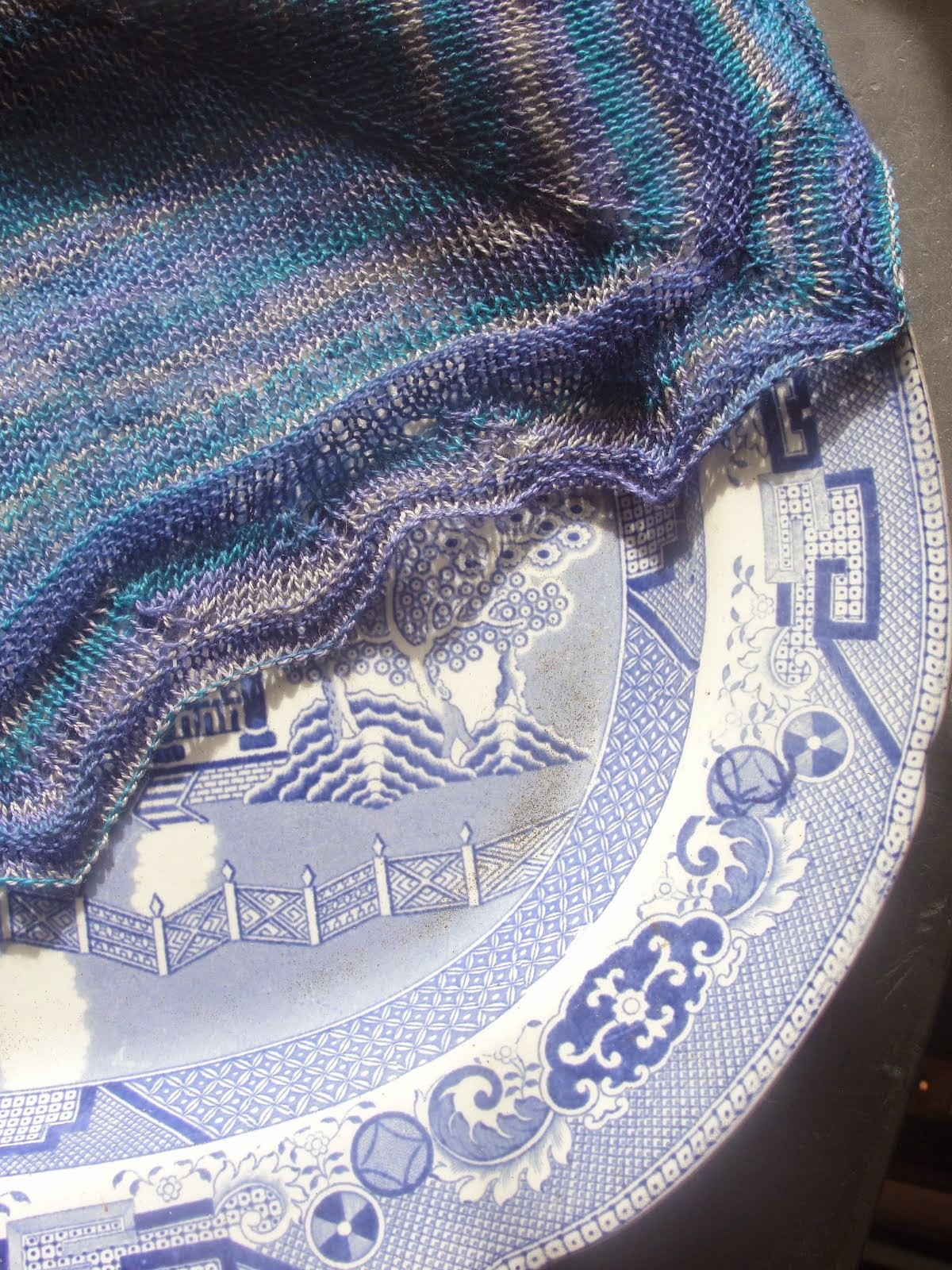 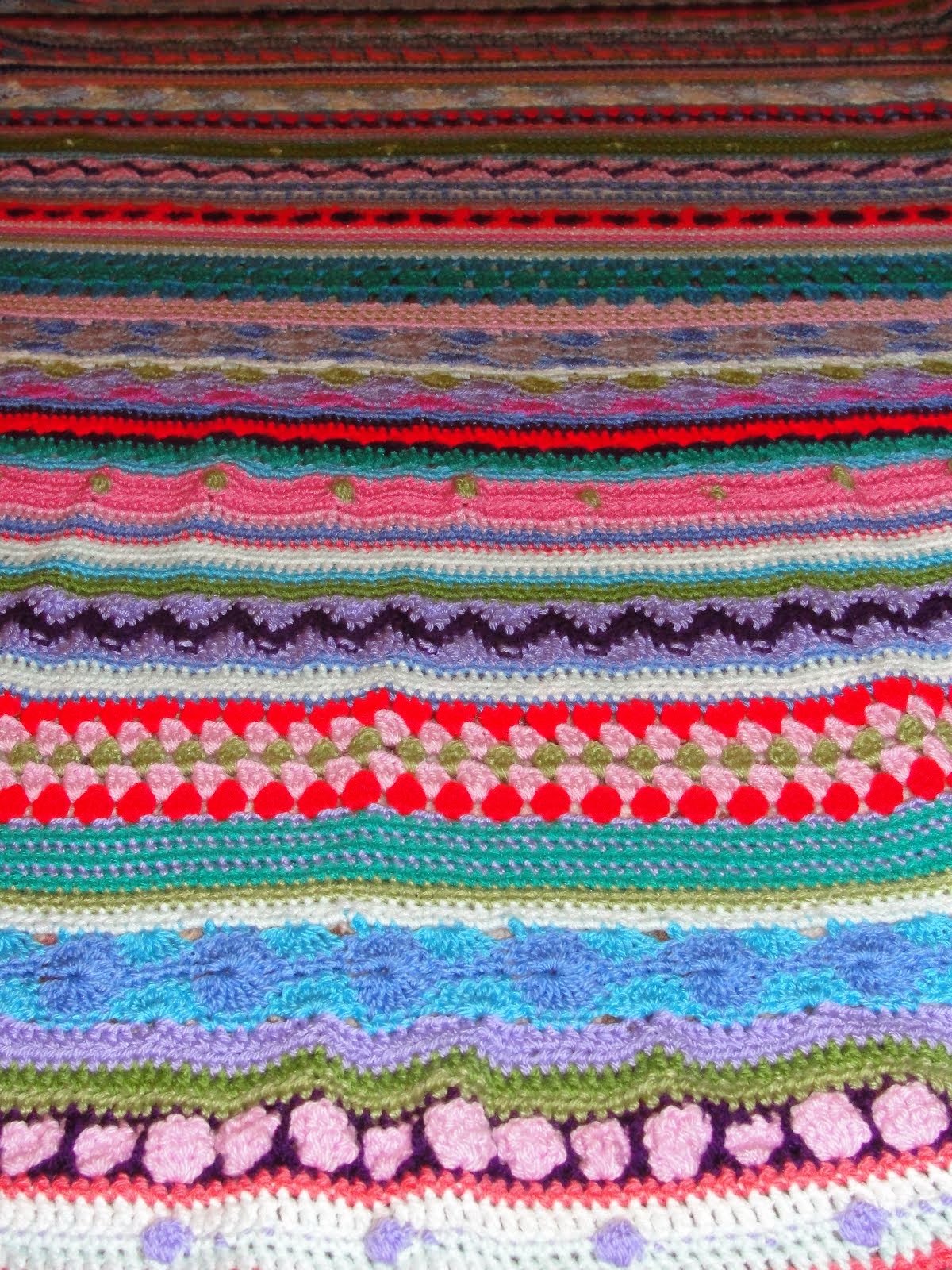 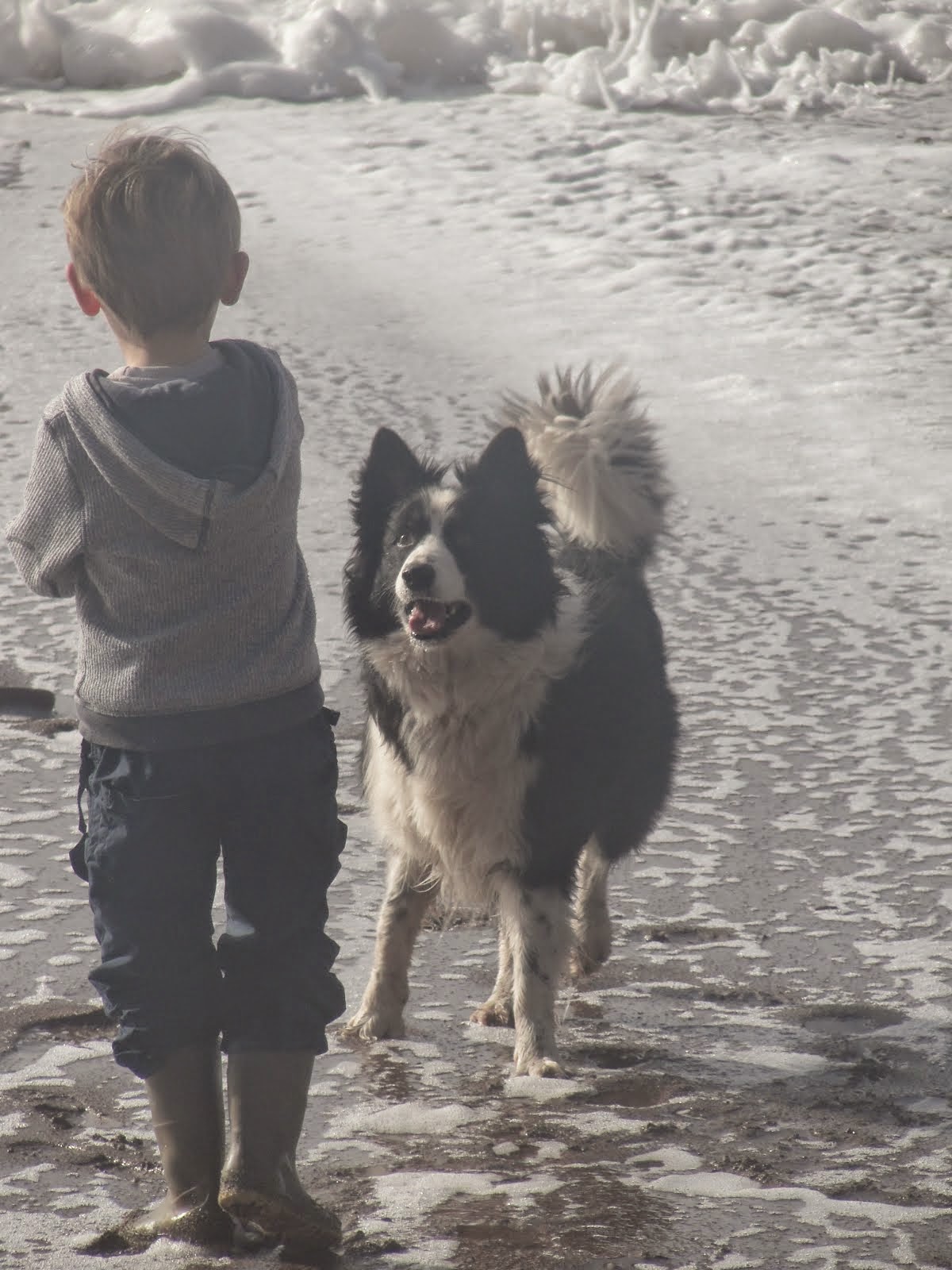